Every now and then, a riddim comes along that encapsulates a great moment in time. And that riddim right now is “The Rock Steady Riddim” which has a unifying theme which asks the question, drum roll & the guitar pick please, what is a Rock Steady Riddim? 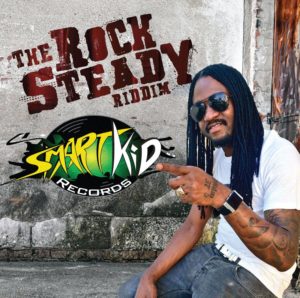 Producer Smartkid must be commended for the quality production evident in The Rock Steady rhythm, a new Reggae compilation featuring heavyweight-acts such as Turbulence, Zamunda, Navino, Lutan Fyah, and others.

Lutan Fyah shines with the hard-hitting ‘Spliff Tail’ that addresses matters such as not doing no Jail time fi no herb, morality and ‘livity’ in a husky, hardcore voice that will ignite the reggae/dancehall. The sweet-voiced Navino shows his excellent vocal range on ‘On my way’ where he declares that success will come one day. On his journey progress keep calling him. Navino walks the path of righteousness and non-violence, and his song is arguably, the strongest song on the riddim because it can graduate to forward status in the reggae/dancehall because of its-underlying ‘against all odds’ message that will appeal to the youths turned off by the culture.
Turbulence shows a great return to form with ‘Vampire Slayer’, a brilliantly conceived single that appears to poke fun at his recent feud with his girlfriend Sasha which is also a recording artist, even while giving young people a subliminal message of choosing your own path and not allowing the wicked to hijack their lives. In the-intro, he warns all ghetto yutes to watch out for friends and bun dirty wolfs and leopard, it only causes peer pressure. In the chorus, he deejays: Vampire Slayer the wicked can’t stay here. The rhyming scheme in the first verse is classic Turbulence where he uses his elastic delivery to swing his lyrics in the groove of the riddim: garlic may not be a phobia for them, they just want see a lot of blood a shade.
Mizdee announces her arrival hailed from South Africa international Act on the reggae scene with the combative ‘I’m a survivor’ where she demonstrates great clarity and a efficient delivery to get her point across, while Influential shows great versatility with ‘Do good and live’ as he buns out the bad mind and hype.
All the songs were recorded at Smartkid Records’ multi-purpose recording studio, located in Portmore, St Catherine. Established in 2010 and is now recognised as one of the best multi-purpose recording studios located in the Kingston Metropolitan Region.
Omar’Smartkid’ Currie, managing director of Smartkid Records Company Limited, has worked with renowned entertainers like Zamunda, Lutan Fyah, Spragga Benz, Sizzla, Christopher Martin, Beenie Man, Navino, Frisco Kid, Andrew, Merciless and Wadda Blood, Junior Reid and others.
The company scored its first major success with the release of the Life Riddim CD in 2010, which featured successful reggae artistes like Zamunda, Influential, Bono-G, Lutan Fyah, Linkage Internal and Frisco Kid.
In 2011-2015, Smartkid followed up with the release of hardcore & culture, full-throttle dancehall/reggae rhythm just to name a few-Venom rhythm, True Frenz rhythm, and (progress rhythm-reggae), etc. which established the company’s street credibility and got people to sit up and pay attention to this talented producer with big dreams.
“Rightnow, mi nah drop the ting, quality music mi say,” he said.
Name of Album/Compilation: The Rock Steady Riddim
Release Date: 18th of April 2015
Released by: Smartkid
Record Producer/Recording Engineer
And C.E.O. At:
Smartkid Records Ltd.
Multi-Purpose Recording Studio
located in Portmore, St Catherine
Kingston Metropolitan Region
Tel.: (876)-893-7490 | (876)-776-0082
Email: info@smartkidrecords.com
Website: https://ww.smartkidrecords.com
Facebook: https://www.facebook.com/smartkidrecords
Twitter: https://www.twitter.com/smartkidrecords
Instagram https://instagram.com/smartkid_records
YouTube: https://youtube.com/smarkidrecords
SoundCloud: https://soundcloud.com/smartkidrecords

Tag Cloud
Nuh Normal EP Debut Smartkid Records The Rock Steady Riddim Sofia Kourtesis Single Reggae Compilation Sizzla Cambios The Majestic Riddim Lead Us Jah Esa Records Berlin Snowhite Album Mr Woodnote Bristol 2016 UK Dubstep EDM Pop Mondial Release SuperKaleider DubFX
We use cookies on our website to give you the most relevant experience by remembering your preferences and repeat visits. By clicking “Accept All”, you consent to the use of ALL the cookies. However, you may visit "Cookie Settings" to provide a controlled consent.
Cookie SettingsAccept All
Manage consent

This website uses cookies to improve your experience while you navigate through the website. Out of these, the cookies that are categorized as necessary are stored on your browser as they are essential for the working of basic functionalities of the website. We also use third-party cookies that help us analyze and understand how you use this website. These cookies will be stored in your browser only with your consent. You also have the option to opt-out of these cookies. But opting out of some of these cookies may affect your browsing experience.
Necessary Always Enabled
Necessary cookies are absolutely essential for the website to function properly. These cookies ensure basic functionalities and security features of the website, anonymously.
Functional
Functional cookies help to perform certain functionalities like sharing the content of the website on social media platforms, collect feedbacks, and other third-party features.
Performance
Performance cookies are used to understand and analyze the key performance indexes of the website which helps in delivering a better user experience for the visitors.
Analytics
Analytical cookies are used to understand how visitors interact with the website. These cookies help provide information on metrics the number of visitors, bounce rate, traffic source, etc.
Advertisement
Advertisement cookies are used to provide visitors with relevant ads and marketing campaigns. These cookies track visitors across websites and collect information to provide customized ads.
Others
Other uncategorized cookies are those that are being analyzed and have not been classified into a category as yet.
SAVE & ACCEPT